Al-’Abbas could no longer bear life after having seen how his companions and the members of his family killed  and how the Hujjah of his time was suffering from the great number of the enemies surrounding him after his supply route had been cut off and after hearing the women wailing and the children crying of thirst. He, therefore, sought permission from his brother. Since al-’Abbas (‘a) was the most precious asset to the grandson of the Prophet (S), who is soon to be martyred, especially since the foes always dreaded having to fight him and feared his advance, and how the ladies felt a sense of security upon seeing the standard raised high, the sacred soul of the Father of the Oppressed did not accept to part with him.

The Imam (‘a) said to him, “O brother! You are my standard bearer!”21Al-’Abbas (‘a) said, “I am fed-up with these hypocrites, and I want to seek revenge against them.”

Al-Husayn (‘a) ordered him to bring water for the children, so al-’Abbas went to those people and admonished them, warning them of the Wrath of the Omnipotent, but all of that fell on deaf ears.

He then shouted: “O ‘Umar Ibn Sa’d! Here is al-Husayn son of the daughter of the Messenger of Allah! You have killed his companions and family, and here are his children suffering from thirst! Give them some water, for thirst has burnt their hearts!”

As he kept repeating his pleas, he also kept saying to them, “Let me go to Rome or to India, and I shall leave Hijaz and Iraq for you all.”

There were some people among the enemy ranks who were genuinely moved by those pleas, so they wept, but al-Shimr shouted as loudly as he could, “O son of Abu Turab! Had the face of earth been entirely covered with water, and had it been in our hands, we would still have not given you a drop of it to drink unless you swear the oath of allegiance to Yazid!”

Al-’Abbas went back to his brother to tell him of the outcome of his negotiations with those ruffians. Al-’Abbas heard the children crying of thirst,22 so he could not tolerate the situation any longer. He was fired up with his Hashemi zeal.

The one whose light enables all to see At Karbla’ is killed and none to bury, O Grandson of the Prophet! May He Reward you with goodness for us and for me, May your balance of Good Deeds never fall short. To me you were a mountain where I seek resort. To be kind to kinsfolk you used to always exhort. Who now shall to the orphans and the destitute import And to whom shall the helpless go when in need? By Allah! Never shall I fall short of my every deed By trading you for anyone else's worth Till I am buried between the sands and the earth Then he rode his horse and took the water bag. As many as four thousand archers soon surrounded him and shot him with their arrows, yet their large number did not impede his attempt. He kept chasing those throngs alone as his standard kept fluttering above.

Those people could not tell whether that was al-’Abbas who was thus slaughtering their heroes or the wasi roaring on the battlefield. Their men could not maintain their grounds before him, and he succeeded in getting into the Euphrates river heedless of the huge crowd around him.

The mighty lions mourn their youths And their saviour when calamity overwhelms, Mourning them with blood. So tell the burning heart How the red sigh does ascend; It yearns, but its yearning is crying, It mourns, but its mourning is only by sign.23

The moment he took one handful of water to drink he remembered how thirsty al-Husayn (‘a) and those with him were, so he spilled it then said:24

O soul! After al-Husayn nobody does count! After him, you should to nothing amount, Here is al-Husayn nearing his end While you drink of cool water?! By Allah! Such is not a deed At all enjoined by my creed!25

Then he filled the water bag, rode his horse, and went in the direction of the camp. His path was blocked, so he

kept killing those who blocked it till he was able to make his way through them as he was saying:

I do not fear death when it calls upon me,

Till among the swords you bury me.

My soul protects the one

Who is the Prophet's grandson,

Al-’Abbas am I, the water bag do I bear

When I meet evil, I know no fear!

dealing a sword blow to his right arm, completely severing it. He (‘a), said,

By Allah! If you cut off my right hand,

I shall not cease defending my creed,

And an Imam true to his conviction do I defend,

A son of the trustworthy Prophet whom Allah did send.

getting the water to the children and the family of al-Husayn (‘a), but Hakim Ibn al-Tufayl was still hiding behind another palm tree when he passed by.

Hakim struck him with his sword on his left hand, amputating it, too,26and soon a large number of men were surrounding him. Arrows fell on him like rain, piercing the water bag and boring a hole in it through which its water was completely spilled. An arrow pierced his chest.27 A man hit him with a pole on his head, severely injuring him.

Beside al-’Alqami he fell, how I wish to witness

Those who subdued him drinking of bitterness.

He fell on the ground shouting, “Peace unto you from me, O father of ‘Abdullah!” Al-Husayn (‘a) rushed to him.28

How I wish to know in what condition he went to him, with a soul imperiled by this great loss, or by the brotherhood that pulls a brother to his beloved brother...

Yes; al-Husayn (‘a) reached him and witnessed how sacrifice is being offered to the Holy One on a plain covered with blood and crowned with arrows. Al-’Abbas had no might nor speech nor anything whereby he could keep his foes away. He could not even see anything; his head was on the ground bleeding.

Is it accurate to say that al-Husayn (‘a) saw all of these calamities and still had any strength whereby he could stand on his feet? Only al-Husayn remained after the martyrdom of Abul-Fadl. He remained a figure staring in the sky, stripped of all the necessities of life.

He, Allah's peace be upon him, described his condition best when he said, “Now my spine has been split and my endeavour is further weakened.”29

So the mountains crumbled for his pain.

Why not since it was the beauty of his face

And on his forehead the pleasure of his heart?

O supporter of his family, waterer of his children,

Bearer of the standard with all his determination!30

He left him where he had fell and did not move him anywhere due to a hidden reason which time later unveiled:

He was to be buried where he had fallen separately from the other martyrs so that he would have a mausoleum of his own visited by those who seek his intercession with the Almighty to grant them the fulfillment of their wishes, and so that his gravesite would be a place for the ziyaratof the people who seek nearness to the Almighty, Praise to Him, under its dome that stands lofty in the sky, glowing.

It is there that dazzling miracles manifest themselves and the nation thereby comes to know his lofty status and station with Allah Almighty. It then carries out its obligation of loving him which is renewed by continuous visits.

Greeting him will establish a link between them and Allah, the most Exalted. It was the desire of the Hujjah of his

time, the father of ‘Abdullah (‘a), and of the Omnipotent, Praise to Him, that the apparent status enjoyed by Abul-Fadl al-’Abbas should be similar to the one preserved for him in the hereafter, and so it was.

Al-Husayn (‘a) went back to the camp feeling extremely depressed, tearful. He kept wiping his tears with his cuffs as men raced with one another to assault his camp.

Sukayna, his daughter, came to him and asked him about her uncle al-’Abbas. He told her of his being killed.

Zainab heard him revealing this sad news, so she cried out, “O brother! O ‘Abbas! O our loss after you!”

He called, filling the valleys with his cries

Even solid stones from their horrors are in pain

O Brother! Who after you shall guard Muhammad's daughters

When they seek mercy from the merciless?

My hands after you are paralyzed,

My eyes blinded, and split is my spine,

For others, cheeks are beaten,

But these white deer before my eyes

Are now beating their cheeks.

Between your terrible death and my own

Is like I call you before and you are pleased,

Here is your sword: Who after you

Shall with it subdue the foes?

And here is your standard: Who shall with it advance?

O son of my father! You have dwarfed in my eyes

The death of all my offspring,

And the wound is healed only by

What is more painful, so

He knelt over and his tears

He wished to kiss his lips but he found

No place spared from a weapon's kiss.32 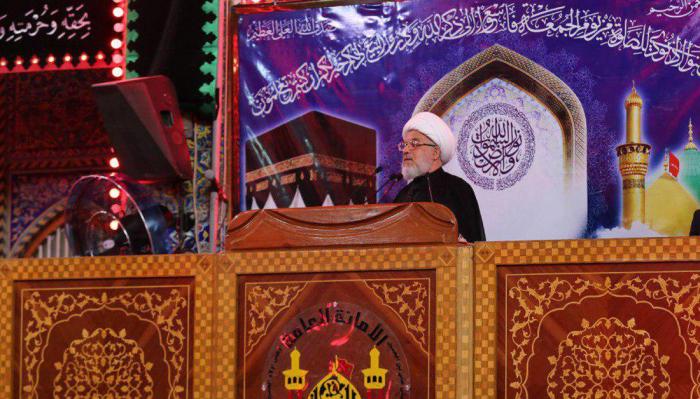 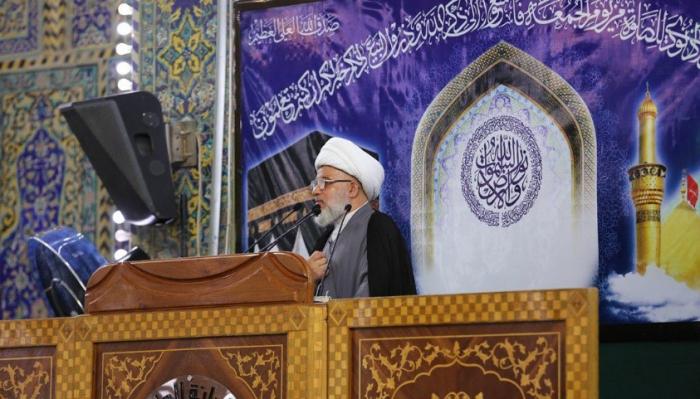 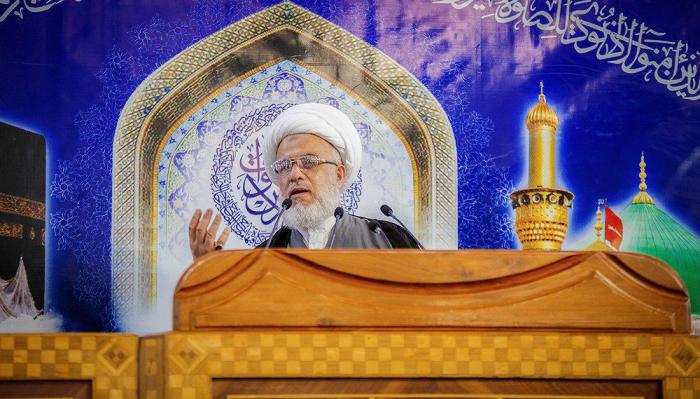