The population of the holy city of Karbala is increasing like any other Iraqi governorate due to the factors of natural increase resulting from the increase in the number of births compared to the number of deaths, not to mention the increasing internal immigration to this holy city because of its good security conditions and the availability of job opportunities.

The population analysis here is based on the 1997 census and the 2009 population census (which is a preliminary census). The population of the Karbala governorate has increased from 235,594 people to 254,013,254 people between the two censuses, while the number was then expected to rise to 1,210,000 people in 2013 at a growth rate of approximately 4.4% annually, which thus surpasses the total growth rate of Iraq, which was 1.3% during the period between 1997-2009.

According to the administrative units in the holy province of Karbala during 1977 and 2009, the interest in the distribution of the population arises according to the strategic vision of the current and future challenges resulting from the imbalance between the population and the available natural and economic resources, which makes it a population, development, and environmental problem that requires political interventions to correct it. As for the developmental vision, it is concerned with the relationship between the requirements of distribution and composition of population, and the ability to meet them. 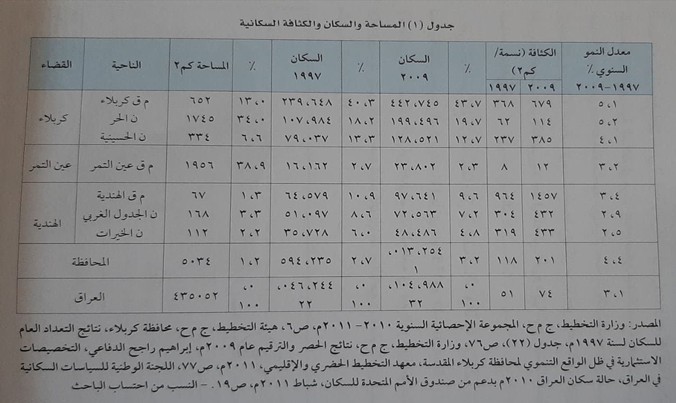