Tazia refers to replica of Imam Hussain’s mausoleum in Karbala.

According to Dunyanews.tv, the city of Multan has long been known for the tradition of observing the mourning in the month of Muharram with much religious reverence and paying tribute to the martyrs of Karbala and the sacrifices of Hazrat Imam Hussain A.S.

South Punjab is considered one among the region where every year, a large number of Azadars are gathered in the processions of Ashura with Alam, Taziye, Zuljanah and others.

Taziyadari since ages remains a significant part of the mourning tradition of Multan. Tazia refers to replica of Imam Hussain’s mausoleum in Karbala (Iraq) and they are taken out to mark his martyrdom of 10th of Muharram every year.

Tazia refers to replica of Imam Hussain’s mausoleum in Karbala in Iraq and are taken out as a procession to mark the great martyrdom of Imam Hussain and his companions on 10th of Muharram every year.

It is being said that a local resident Madhu Khan - some 200 years ago went to perform Hajj and upon his return made his way to Karbala-e-Moala to pay homage at the shrine of Hazrat Imam Hussain. During his stay in Karbala, he had seen a dream for consecutive three nights where he has been asked to initiate the custom of mourning of the martyrs of Karbala and spread the message of the great sacrifice of Hazrat Iman Hussain, his companions, family and his devotees. On his return to Multan, Madhu Khan began observing the rituals of zuljinnah and alam during Muharram and led processions. After him, the caretaker of the procession has asked the best artists from Multan and Bahwalpur to design Tazia which includes the most admired Ustad Pir Bux.

Ustad Pir Bux designed the five storey-Tazia on which a large number of students of him under his supervision worked. On the other hand, one of his student, while working on the Tazia of his teacher, spent all his night in designing his own and succeeded in building seven-storey Tazia. Ustad Pir Bux appreciated the efforts of his student.

Two of the oldest and colossal Tazias of Indian sub-continent are taken out on Yaum-E-Ashura every year in Multan. The Tazia of the Ustad is a remarkable 27-foot structure with seven storeys, made completely out of Sagwan (teak) wood which appeared early in the morning of Ashura whereas the five storey Tazia of hagird appear by noon on the day of Ashura. Thousands of devotees assemble on both sides of the roads to have a glimpse of the tazias of Ustad-Shagird.

The Tazia of Ustad weighs more than 2800 Kg and was prepared in the span of 5 years whereas the 4000 kg Tazia of Shagird after some twenty years was prepared. It is also being said that the original Tazia of Shagird was burnt down during the mob invocation and was destroyed one another time.

The first official licence for the Muharram processions was given by the British government to the Tazia of the Ustad in 1860, allowing the bearer to organise and lead religious processions. These licences are issued by local authorities and inherited by the next custodian of the Tazia. Not only shias but also a large number of Sunnis together have been led the processions of Tazias durng Muharram maintaining the interfaith harmony with religious zeal and reverence. 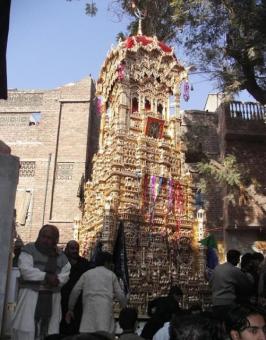 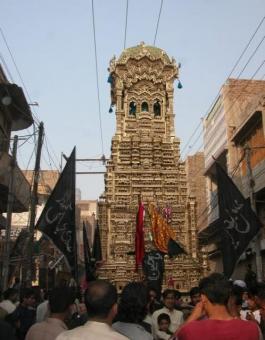 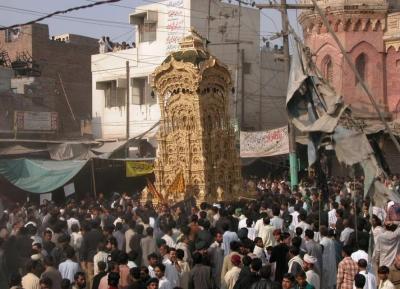 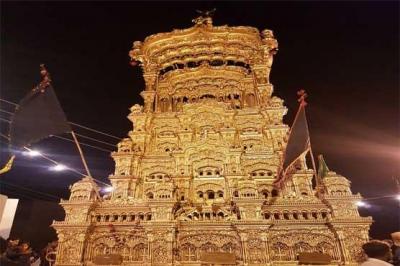 Bangladesh: Mourning ceremony on the anniversary of demolishing the shrines of Prophet Muhammad’s family in al-Baqi Cemetery 2022-05-11 40