It was the biggest challenge of Charlie's life but he was not walking alone.

Both rested their eyes on me. Then, without hesitation, the driver reached down beside his seat, fumbled around, and pulled out a tattered black leather wallet. He removed three crisp red notes and thrust them towards me.

After a week in Baghdad, I rode the night train down to Basra – Iraq’s southernmost city. This would be my starting point for a walk of more than 280 miles north to the shrine of Mohammed’s grandson Husayn in Karbala.

I was nervous. At 24 years old, it would be the biggest challenge of my life. But I would not be alone. No. I would be joined by hundreds of thousands of Shi’ite Muslims making the same journey north ahead of Arba’een, a festival mourning Husayn’s death.

Husayn’s devotees line the pilgrims’ way like pollen grains on a bee’s legs. They erect marquees and tents, bake biscuits, mix squash, ladle sour ayran, grill carp, prepare nargileh shisha pipes, and slaughter goats. Some even offer their hands to pilgrims in need of a massage.

On this route, I found myself after five days crisping under the Basra sun. With me was a friend of a friend of a friend named Hisham, with cropped grey hair, a black Puma tracksuit, and a cyst the size of a golf ball clutching his left temple. An incessant nargileh smoker. He spoke no English. Together we took our first steps north.

Charlie received a private sunset tour at the ancient city of Ur near Nasiriyah in southern Iraq CREDIT.

The journey was quick to become strange. One man standing outside a mowkib tent, a shelter for Arba’een pilgrims, rushed over on the first day, eyes alive and brows ascending towards a thinning hairline.

The man froze where he stood. Like a computer program receiving an incorrect input, he said nothing. Then the edges of his lips curled upwards to show a set of gums so unfurnished you could have projected a film onto the back of his throat.

Another 15 miles lay ahead tonight. I told him please and thank him. Peace be upon you. And as I turned back to the road, a shout filled the air.

The man was in ecstasy. And everyone on the busy evening road to Karbala turned to look at me. Every child, every goat, every woman, and every man.

At 4 am the following morning, Hisham and I entered a great mowkib stuffed with 300 heads. Hisham led me to a quiet corner of the tent. But five minutes after arriving, there was a crackle from the speakers lining the walls.

We would never reach Karbala if every mowkib between Basra and Baghdad received us like this. Hisham bought me a keffiyeh headscarf the same day. We decided I would be Turkish.

After a few days, we were invited into the house of a man north of Al-Madinah. He ushered us into a traditional mudhif reed hut in which a group of 12 other men drank chai and dragged on cigarettes. Beside the entrance, an array of brass coffee pots warmed atop an iron grill above a bed of molten coals.

Food was brought in. Young men laid out wide dishes of fatty meat in wet nests of fresh bread. Side dishes held collapsing mountains of mint and parsley. Roast chickens encircled us and tall steaming stacks of khubz finished the set. I was ushered forward for the first mouthful. The others followed.

A man beside me with grey stubble and rimless glasses poked at a small black orb nestled in the fatty sheep head before me.

He pointed at his yellow eye.

“Sheep. Only for the most important person at the meal.”

He poked it towards me.

With three fingers I brought this black, sinuous conker of an eye to my mouth. The men stopped eating. They stared. I pushed it in and chewed. I swallowed. They hesitated, then smiled.

Someone asked if I needed anything.

Were we never hospitable like this in Europe? I sang about it in hymns at school and received lessons about it from the Bible. Where did this unconditional generosity disappear to? I pledged to pull a thread from this Iraqi culture and bring it home with me.

We lived like this for two weeks. Always food was laid out. Always a mattress to sleep on. Always that quiet keenness to serve guests.

After 250 miles and many meals, my stomach started to turn near Hillah. My body had slept no longer than four hours a day in the preceding weeks. It needed rest.

Two hours into the walk one night, there was a reed mat with three shawl-wrapped bodies lying in the dust beside the road. It looked comfortable. I lay down to rest and told Hisham to go on without me. I would meet him in the following town.

I awoke at 5 am, now unable to stand and desperately thirsty. The man lying asleep at the end of the mat was snoring. But I had no choice. I shuffled over to him with my dry eyes and shook his shoulder. Nothing. Again, but harder this time. He jolted awake.

The man on the mat looked at me through bleary eyes, sat up, rubbed his face with the butts of his palms, pushed himself up on his left arm and flip-flopped across the street. A minute later, he returned with a large bottle of water, lay down, and returned to sleep. I almost laughed.

Three days later, I was walking at last beneath the golden domes of Karbala. A week later, I was returning home with that thread of their culture, ready to sew into our own. 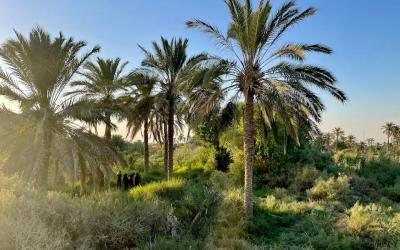 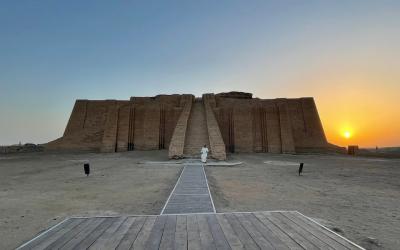 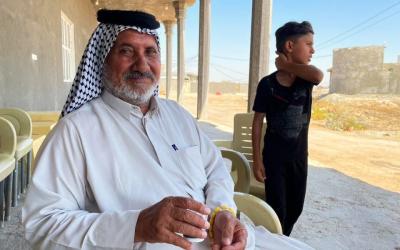 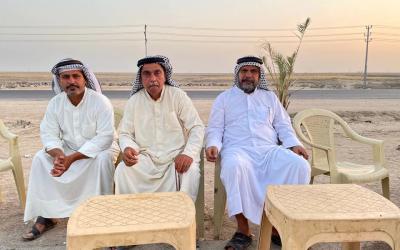